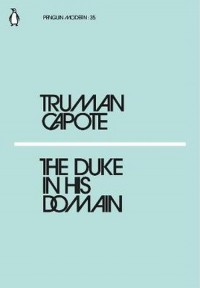 The Duke in His Domain - opis wydawcy:
Now Brando looked at people with assurance, and with what can only be called a pitying expression, as though he dwelt in spheres of enlightenment where they, to his regret, did not.

This mesmerizing profile of an insecure, vulnerable young Marlon Brando, brooding in a Kyoto hotel during a break from filming, is a peerless piece of journalism.

Penguin Modern: fifty new books celebrating the pioneering spirit of the iconic Penguin Modern Classics series, with each one offering a concentrated hit of its contemporary, international flavour. Here are authors ranging from Kathy Acker to James Baldwin, Truman Capote to Stanislaw Lem and George Orwell to Shirley Jackson; essays radical and inspiring; poems moving and disturbing; stories surreal and fabulous; taking us from the deep South to modern Japan, New York's underground scene to the farthest reaches of outer space.

Kup książkę The Duke in His Domain

Opinie o książce - The Duke in His Domain

Controversial and compelling, In Cold Blood reconstructs the murder in 1959 of a Kansas farmer, his wife and both their children. Truman Capote's comprehensive...