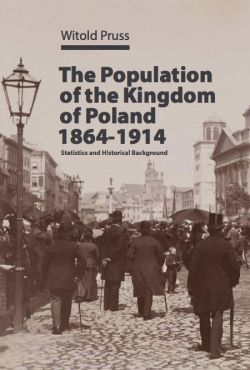 This book is intended as a discussion of certain phenomena from the period of great demographic transformations within a small patch of Europe. It seems that the Kingdom of Poland (re)confirmed the nineteenth-century demographic realities whilst serving as an example of regional singularity.

The study discusses the increases in the population of the Kingdom of Poland in the period after the abolition of serfdom and enfranchisement of peasants, launched by the Tsar in 1864, until the First World War (1914–18). The proposed analysis of the increase/decrease trends, distribution, ethnic/confessional distribution and professional structure is preceded by a description of other related important problems. First, we present the territory of the Kingdom in the context of historical and geographic divisions of Polish lands. We sought to show the ways in which the Partitions of Poland-Lithuania tore up the historical territory of Poland and how in a small part of it a new autonomous unit, independent in certain respects, which resisted an ‘organic’ incorporation into Russia, in spite of the unifying tendencies after 1864. The other issue to be outlined here is the conditions of economic and social development — a description that is meant to form the background for a discussion of certain selected population-related problems in the Kingdom of Poland. As a question of special importance, a dedicated chapter deals with assessment of statistical materials used in this study. The bibliography/list of references mentions the studies used in our text as well as those which have not been directly used but contributed to the development of a general view of the issues in question. With a limited statistical foundation at our disposal, we have avoided proposing any categorical forms of inference.

Witold Pruss (1943–2005) — was a Polish historian, Varsavianist, educator and social activist associated with the University of Warsaw. He specialized in the economic history of the 19th century.

Kup książkę The Population of the Kingdom of Poland, 1864–1914: Statistics and Historical Background

Opinie o książce - The Population of the Kingdom of Poland, 1864–1914: Statistics and Historical Background